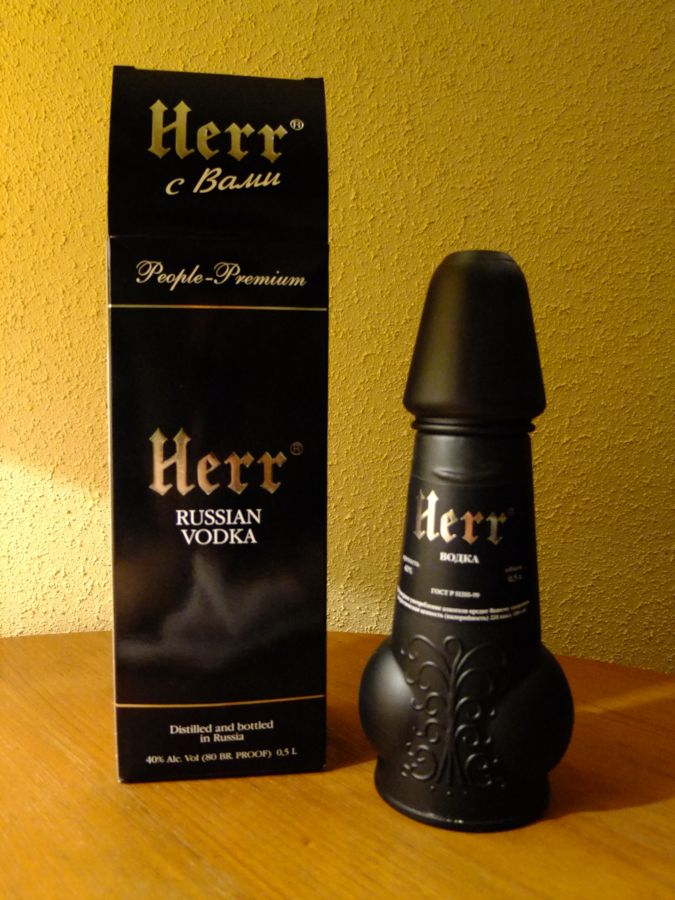 Thanks to the ignorant minds and fragile hearts of some Malaysians, a Malaysian brewed whiskey brand Timah has gained significant publicity and brand awareness, despite alcohol drink is not supposedly consumed by most proportion of Malaysian Muslim population.

Tired of idiocy, I feel lazy to dig deep into the motive of such opportunists, but it gives me the curiosity and opportunity to search for more alcohol brands that sound funny, or downright offensive in some common languages.

Unfortunately, this vodka is no longer in production. I think this product is misogynistic. However, this phallic-shaped bottle is going to make Malaysian politician go bonkers, though every male got one such organ that is vital for the survival of human race, idiots included.

This Russian Vodka was designed to voice out the people’s dissatisfaction against Russian annexation of Crimea. Possibly one day, Malaysian democratic fighters will infuse their spirit into creations.

“Kukujiao” is the nickname for penis in Chinese. Ask any Malaysian young kids about it, and you shall trigger some funny giggles. This set of more than 20-year-old single malt whiskey was priced at RM15K, definitely not aimed for the dirty peasants like me.

I have never tasted neither this beer nor sweaty bikini before, therefore I cannot relate the taste to the name just yet. However, according to Eviltwin Brewing (Westbrook Brewing Co), ‘this is an attractively light bodied, seductively well balanced and very drinkable, anything but a sissy beer‘.

Orang utan is the pride of both Malaysia and Indonesia. While the intelligent primate prepared this ‘unpredictable‘ beverage for us,

Can you recall the taste of such delicious mind pictures? How about close your eyes, and let the lusty and incoherent drops slip down your throat and trigger all the good talking.

Malaysia has our Ayam Brand, beloved for all kinds of canned proteins and processed foods. The idea of draining a cock down a thirsty throat is going to pollute the mind of teetotaller as well. Personally I think this could be the most harmless brand in the list.

Someone is going to accuse the drinker of bestiality, isn’t he?

It’s actually quite innocent for such brand that rhymes with adorable baby, but when it comes to fragile Malaysia, it becomes a direct insult to whom with low intellects – ‘babi‘ means pig in the national language. I wonder who would listen to those who got insulted at the first place.

Similar to the first entry in this list, this brand name is going to make some huge waves if being sold in Malaysia. “Puki” literally means the external of a female sexual organ. Given the feeble mind of some conservative idiots, someone is going to claim that he or she is going to confuse it as some ‘pussy juice‘.

This is not funny at all. “Omar” stands for the amber in Gaelic, but recently some Islamic NGO’s making noises about the Taiwanese brand reflecting the name of certain Islamic figures.

Language is merely a tool. Different words can carry totally different meanings for different audience. It is not appropriate to interpret names in your own language and culture, then forcefully impose restrictions and regulations based on your own negative interpretations. While Malaysia is a multilingual and multicultural country, it is not OK to force religious and subjective rules down the throat of minorities.

Name is a name. Nobody is forcing you to change the names of your not-so-bright children. Nobody is stopping you from procreating (at least not in Malaysia). So, please keep your hands away from disturbing others naming their products, you cabbage minds.